Quick, Caring Action Saves the Day – and a Pet

Every relocation programme is unique, requiring close attention to all details to ensure our clients’ satisfaction and our mutual success. Some moves, however, stand out as particularly challenging. During these situations, our employees take great pride in providing innovative, caring and customised solutions to our clients and their employees. The following is one of many of these stories.

Quick, Caring Action Saves the Day – and a Pet

Moving can be stressful for anyone, even during the best of circumstances, and even the most organised person can forget things when under stress. Margaret experienced this first-hand during a long-distance move from South Island to North Island, New Zealand. Long after the moving team had loaded her household goods onto a lorry and driven away, she realised she had never tucked her beloved cat away in a safe place before they’d arrived. In fact, she’d been so busy that she hadn’t told the movers that she had a pet at all. After searching cupboards and the small pile of personal items that had been left behind, she began to panic; Nala was nowhere to be found.

Outside of business hours and several hours after the movers had left, Simon Hall, Otago Branch Manager of Allied Pickfords, received a frantic call from Margaret. She suspected that Nala might have crawled into the underside of the sofa, one of the cat’s favourite places to hide. Thankfully, Margaret’s household goods hadn’t been loaded onto the train that would transport them yet, but the sofa had been placed in a plastic bag for protection, sealed, and packed into a container along with all of the other items that once filled her three-bedroom home. As a pet-owner himself, Simon was concerned; the train journey to the northern end of South Island was 400 miles long and the ferry crossing to North Island would add another 50 miles to the trip. If Nala was somewhere in the container, he knew he needed to get to her quickly or she could run out of air.

Wasting no time, Simon got to the container as soon as he could, moved the necessary items to get to the sofa, tilted it so he could see its underside and started tapping it. It didn’t take long for a curious but frightened feline to poke her head out to have a look. Breathing a sigh of relief, Simon created some air holes in the plastic to ensure that Nala could also breathe and called Margaret with the good news. Within an hour, Nala was back in Margaret’s care and, after a hearty thank you to Simon, both were safely on their way to their new home.

The Face Behind the Story: 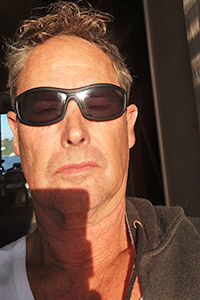 Simon has been a branch manager with Allied Pickfords for over 30 years, with prior experience that began with packing, driving and sales within the industry. Though he was born in Dunedin, New Zealand, he enjoys travelling and had an opportunity to spend some time in Europe in the 80s, working in London and skiing his way around the region in his spare time.

Today, when he’s not helping clients and customers relocate to various areas of New Zealand, he spends time with his wife, Sharon, and their two sons, Matthew and Oliver (who also works with Allied Pickfords). He still skis, but has also developed a passion for windsurfing. His current interests include being the president of his local area’s windsurfing club and collecting and working on classic cars.