Unique Education Solution Helps a Family Thrive During a Relocation

Lisa Marie DeSanto
Content Marketing Manager
Download
Every relocation program is unique, requiring close attention to all details to ensure our clients’ satisfaction and our mutual success. Some moves, however, stand out as particularly challenging. During these situations, our employees take great pride in providing innovative, caring and customized solutions to our clients and their employees. The following is one of many of these stories.

Making the right school choice is always a significant consideration during an international relocation with children. When there are extenuating circumstances, however, those considerations can become challenges that require innovative solutions. Such was the case when Michael, a serial expat, was asked to relocate to Hungary with his wife, Himari, and their family.

As a highly skilled employee with a very unique background, Michael’s employer was counting on him to grow the company. There was simply no one else that could take on the newly created role. Having spent the majority of his career working in locations all across Europe and Australia, Michael assumed another move would run just as smoothly – until he and his wife began considering schools for his two sons.

Securing placements in international schools would be necessary since neither of the boys spoke Hungarian. Due to timing and capacity, however, there were limited openings. The schools that did still have availability were highly competitive and, unfortunately, the boys’ academic backgrounds fell short of their rigorous requirements. After being turned down by every school the boys had applied to, SIRVA employees Jesse Mezera and Peter Wyatt knew they’d need a creative solution; they turned to a trusted school search service provider for alternatives. Together, they came up with an innovative solution that would provide Oliver and George with the best education possible, while still allowing Michael to fulfill his responsibilities to his employer.

Like their father, the boys were citizens of the UK, so it was determined that their best option would be to live with their grandparents in England, where 11-year-old Oliver could easily attend a neighborhood school. Sixteen-year-old George, however, faced an additional complication since mandatory schooling ends at the age of 16 in the UK. To address this challenge, a military-affiliated academy became the wisest choice, providing the young man with an opportunity to complete a traditional education so that he could continue on to college when old enough.

As a Japanese citizen, Himari was not able to live with the boys in the UK. Recognizing how important family time and support would be, Peter worked closely with Michael’s employer to ensure that the boys could see their parents as often as possible. In addition to arranging extra home leave flights for Michael and his wife (four in total per year) the children were provided with two trips per year to fly to Hungary. Timed well, the family could be together every other month.
“It’s important to remember that there are human beings behind every relocation,” said Peter. “To ensure an assignee’s success, we also need to ensure the success of the entire family. In this case, a creative solution was needed. I’m grateful for my colleagues’ expertise in the multiple areas that needed to be addressed to tackle this complicated challenge and allow Michael’s family to thrive.”

The Faces Behind the Story: 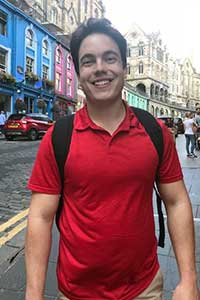 Jesse joined SIRVA in 2013, bringing with him a degree in international business. He’s taught English in Romania and Hungary, is fluent in Spanish and has spent time abroad. In addition to visiting business hubs in Beijing, Shanghai and Hong Kong, he has also spent time on assignment in our Munich office.

In his current role, Jesse manages a team of consultants and is responsible for ensuring an efficient and smooth relocation process for SIRVA’s clients and their employees.
Though Jesse has traveled to eight countries in total, two of his favorite global destinations include London and Xi’an, China. He currently lives in Chicago, where he loves spending time with his wife and daughter, exercising and reading anything he can find on travel, current affairs and history.

Peter joined SIRVA in 2014. In his current role, Peter acts as the single point of accountability for employees of SIRVA’s corporate clients who are relocating internationally for work assignments. By overseeing all services and processes for employees and their families, he plays a key role in providing them with a smooth transition and exceptional relocation experience.

In addition to holding a degree in geography and urban studies, Peter also holds a Real Estate Salesperson’s License in Minnesota, located in the midwestern United States. He currently lives in Minneapolis, where he spends his time reading, producing music, eating great food and then working it off by running or playing basketball. His other favorite pastimes include spending time with his family and friends and playing music “way too loudly” in his car.